Gamla Höfnin (The Old Harbour) (What To See - Capital area) 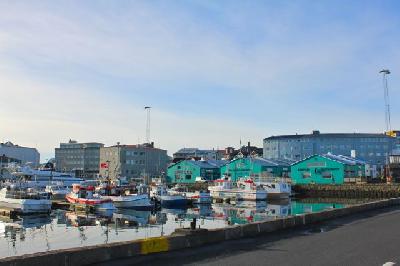 Fishing has long been the main pillar of the Icelandic economy and part of the nation's history and heritage. In towns by the coast you will find that the harbor is often the main hub of activities. The old Reykjavik harbor is no different. The old harbor is a charming and colorful harbor area in the city center. The area offers small shops, restaurants, and cafés by the seaside, where you can see the Icelandic fishing ships and boats docked. The old harbor area stretches between Harpa Concert Hall in the east, to The Reykjavik Maritime Museum in the west, offering a glimpse into Iceland's seafaring history and peoples battle with the often unforgiving ocean.

The construction of the old harbor was completed in 1917 and for the job, two small locomotives were imported, in order to transport rocks from Öskjuhlíð Hill, which was at the time, used as a mining place for large rocks to build the Reykjavík harbor. One of the old locomotives is still on display by the harbor during summer and it is the only train you will see in Iceland.

From the old harbor it is only a short boat ride into the Faxaflói Bay, which is teaming with life, so Whale and Puffin Watching, as well as Sea Angling tours have become very popular. These tours all depart from the old harbor and in winter you are even able to go on a Northern Lights cruise.