Seyðisfjörður Fjord (What To See - East) 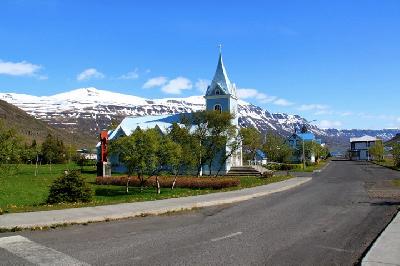 Seyðisfjörður is considered by many to be one of Iceland's most picturesque towns due to the impressive environment and the well-preserved old wooden houses that give the town a certain style and charm. The population of Seyðisfjörður is about 800 people. In summer this fascinating town comes to life; Seyðifjörður acts as a gateway to Iceland with the Norræna ferry transporting thousands of visitors from Europe. Due to the high number of people passing through the town, you can expect to find all major services. At Seyðisfjörður, all essential services are available for travelers, there are hotels and restaurants found in Seyðisfjörður as well as a public swimming pool, a camping ground, a hospital and a post office. There is also a supermarket and a liquer store at Seyðisfjörður town.

Above the town, the river Fjarðará cascades down the steep mountain side with unnumerable small and beautiful waterfalls and runs into Lón, a small lagoon in the middle of the town at the head of the fjord. There is a rather steep road that leads up from the town along the river and across Fjarðarheiði Pass towards the Hérað district and to the largest town in the east, Egilsstaðir. In the past, this proved to be a rather hazardous route, but today, the pass can be traveled on a much safer and better road, which is considered to be one of Iceland´s most spectacular routes.