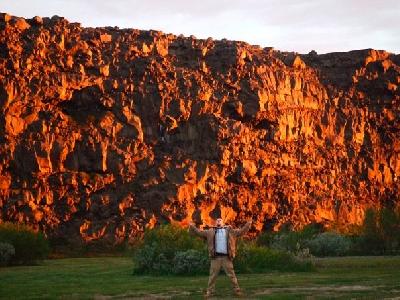 Ásbyrgi Canyon is a fabulous monument to the unforgiving power of nature. It is the Northernmost part of the Vatnajökull National Park. The canyon is horseshoe shaped and legend has it that the canyon was created by the footprint of Odin's eight-legged horse, Sleipnir, but according to Norse mythology the king of the gods, Ódinn had an eight legged horse.

Today, science has revealed that the canyon came to existence during a catastrophic flood in the glacial river Jökulsá á Fjöllum about eight to ten thousand years ago at the end of the last Ice age. Geologist believe that the flood was a result of a volcanic eruption beneath ice in Vatnajökull glacier. It is believed that about 3000 years ago there was another erupion beneath the icecap of Vatnajökull glacier that triggered a second flooding that shaped the canyon to its present shape. After this happened, the river changed its course and today it flows a few km east of the canyon. The canyon is about 1 km wide and the length is about 3,5 km. The walls of the canyon are about 100 meters high and as a result, the bottom of the canyon is very well sheleterd from all directions, where a thick woodland of birch and willow thrives very well and a small forest has formed. The name Ásbyrgi literally translated into English means the Shelter of the Gods.

There is a campsite within the canyon where it is very popular to camp. There are several interesting hiking routes in Ásbyrgi that all begin and end at the car park. The most popular is a short (about 800 meters) and easy hike along the Skógarstígur trail to Botnstjörn, a lovely pond at the innermost end of the canyon. On the pond you are likely to see Wigeons, a duck species that usually nest there every summer. In the middle of Ásbyrgi stands Eyjan, the  island a 250 meter wide cliff that rises above the bottom of the canyon.