Dimmuborgir (What To See - North East) 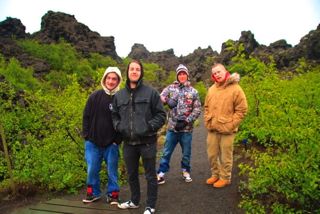 Dimmuborgir "Dark Castles" is a vast area of strangely formed lava formations with a mysterious allure. Dimmuborgir is on the east side of Lake Mývatn, close to the circular highway around the lake.

The formation of these lava formations stems from molten lava that created a lava pond a little more than 2000 years ago during a large eruption of two crater rows called Lúdentarborgir and Þrengslaborgir. The lava was flowing over wet land and trapping water and steam underneath the hot lava. Steam issued from vents in tha lava to form the incredible landscape. The surface of the molten lava solidified when it cooled, making a crust above the molten rock beneath. As the lava continued to flow beneath the crust towards a lower ground, a part of the top crust on the surface eventually collapsed to create this dramatic landscape. Dimmuborgir was used as a location for shooting the famous TV series Game of Thrones. There are a few well-marked hiking trails in the area ideal for a 15 to 40 minute spooky hike. All the hiking routes are relatively easy but the longest will take a few hours. Each of the hiking routes offers many great photo opportunities. The most popular hiking trail is called the church path; it leads you to a lava tube open at both ends with a dome inside called the church. The landscape and vegetation of Dimmuborgir is fragile and it is forbidden to climb outside of the marked paths and visitors must always stay on the marked walking paths.

There is a restaurant located close to Dimmuborgir. Camping is not permitted in Dimmuborgir but there are two public campsites a few kilometers from there. Many locals in the Lake Mývatn area believe that the Yule Lads live in Dimmuborgir and in December you can see these legendary lads there.


There are numerous places of interest close to Dimmuborgir. The Mývatn Nature Baths are one of the most popular tourist attractions in the area, where geothermal water has been used for creating a surreal bathing spot in the middle of a lava field. Námaskarð Pass is also nearby, with numerous boiling solfataras and mud pools. Hverfell explosion crater is not far from Dimmuborgir and a hike to its rim is a rewarding challenge but from there are great views over the Lake Mývatn area and far beyond on a good day.