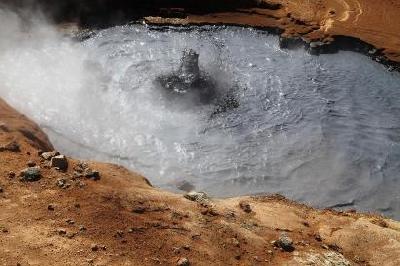 Námaskarð Pass is an area of geothermal activity and offers boiling mud pools in various colors and amazing surroundings. Námaskarð is on the mountain Námafjall, about 400 meters above sea level. It is directly on the Ring Road, number 1, only a few minutes drive from Lake Mývatn. East of Námaskarð is Hverarönd or the  Geyser strip with numerous fumaroles and boiling mud pools, Námaskarð is located close to the volcanic system of Krafla, a large caldera, located to the north of Námaskarð, where there were series of volcanic eruptions from 1975 until 1984 and the two systems seem to be connected. Krafla inclueds the explosion crater Víti. A geothermal power station, Kröfluvirkjun has been built at Krafla, where hot steam is used for spinning turbines for generating electricity. The smell from the Námaskarð area is pretty distinct, due to the sulphur released from the mud pools; the smell is often described as that of a rotten egg. If you are traveling in the area make sure you stop by the bubbling mud pools for a glance. An interesting feature of the Námaskarð area is the lack of vegetation. This is due to the high temperature in the ground and the chemical composition of the soil, which is acidic and unsuitable for any vegetation growth.

The greater Lake Mývatn area is all volcanic. Evidence of recent volcanic activity is everywhere to be seen, and there are numerous post glacial volcanic craters and lava fields in the area, which means volcanic activity in the last 10000 years. Nearby is the impressive and beautifully shaped Hverfell explosion crater, with it´s huge crater which is about 1000 meters in diameter and about 130 meters deep. Hverfell, or Hverfjall as it is also called, erupted about 2500 years ago. The Dimmuborgir lava field is also only a few kilometers from Námaskarð, with its interesting and strange lava formations.

While exploring the Námaskarð area, it is important to be careful and to watch your steps, as the ground can be unstable with boiling hot water and steam beneath your feet. Great caution must be taken when walking around the Námaskarð area, and following signs and staying on walking paths is of great importance.