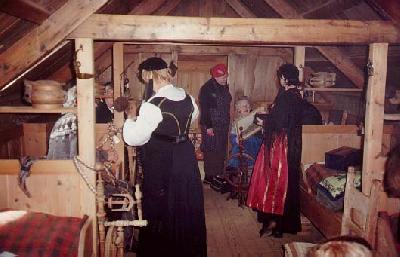 Glaumbær Folk Museum´s first exhibition opened in 1952 in Glaumbær farm, which is an old turf farmhouse, dating back to 1750, located in the Skagafjörður District in North Iceland. Turf and stone was the traditional building materials in Iceland for centuries due to lack of timber and for a long time, the only timber available for building in Iceland was driftwood from other countries. Glaumbær folk museum offers interesting insight into the past lifestyle of the Icelandic people in the 18th and 19th century. The main focus of the exhibition is rural life in Iceland during the 18th and 19th centuries. Visiting Glaumbær is truly a step back in time. Before the old turf house was built in 1750, people have lived there since the time of settlement in 874 and Glaumbær was an active farm up to 1947. In the 11th century, a man names Snorri Þorfinnsson lived here along with his parents but he was most likely the first European to be born in America, long before the arrival of Christopher Columbus to the continent. His parents Guðríður Þorbjarnardóttir and Þorfinnur Karlsefni had been on an exploration in America at the time Snorri was born. Snorri built a church at Glaumbær and is viewed as one of the strongest advocators in the process of converting Icelanders to Christianity from the Norse pagan god religion. Glaumbær is a must visit for anyone traveling in North Iceland with even the smallest interest in history.