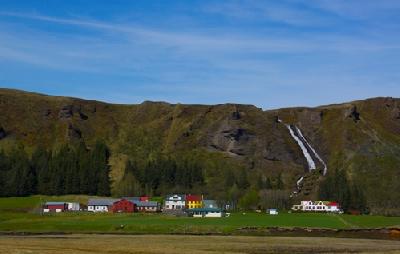 Kirkjubæjarklaustur, sometimes referred to as Klaustur because it's easier to pronounce, is a small town with a rich history. Some indications point to the conclusion that Irish monks settled here before the Norse settlers. This was always a Christian community where heathens were not welcome.The name translates in English as Kirkjubæjar Abbey and from the year 1186, a convent of Nuns, Kikjubæjar Abbey was located at Kirkjubæjarklaustur until the middle of the 16th century when the reformation got through in Iceland. Klaustur is an attractive town with some intriguing natural sites close by making it well worth the visit.

At Klaustur, which is primarily a service center for the surrounding farming communities, you will find a supermarket, filling station, a library, a swimming pool, a café, a restaurant, and a camping ground to name just a few.

The surroundings and Kirkjugólfið, the Church Floor

An interesting tourist attraction in the village is Kirkjugólfið which means the  Church Floor It is a natural pavement of basalt columns. Only the top of the columns can be seen so it looks like they are man made tiles that have an appearance similar to a church floor. However, they were never a church floor. Other attractions but a bit further away are Fjaðrárgljúfur Canyon, a beatuful canyon carved by a small river, the famous Laki Craters or Lakagígar Craters and Eldgjá, a volcanic fissure and Skaftafell National Park that are all located within the Vatnajökull National Park. Close to the village is a beautiful waterfall called Systrafoss which means Sister´s Falls and derives its name from the nuns at the Abbey. According to an old tale about two nuns from the Abbey is that they went one day walking along the river to a lake above the waterfall called Systravatn Lake, which is the source of the river. In the lake they found a golden comb on the bottom of the lake. In their attempts to retieve it, they both drowned. There is a hiking path along the river to the waterfall and further to the lake above from where there are fantastic views.