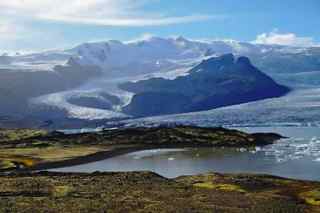 The majestic Vatnajökull Glacier is Europes largest glacier, situated in the south eastern part of Iceland, covering an area of almost 8,000 square kilometres or about 8% of Iceland´s surface. Like all glaciers on the planet, Vatnajökull is melting and receeding due to the global warming and is getting smaller every year. The ice cap reaches 1,400 to 1,600 meters above sea level, making it visible from about 350 miles away when weather conditions are right. The average thickness of the ice is about 380 meters, or about 1250 feet and the maximum thicness is almost 1000 meters. It´s highest peak is Hvannadalshnjúkur, which is a part of Öræfajökull, just over 2100 meters above sea level.

Öræfajökull is one of many active volcanoes, hidden under the icecap of Vatnajökull. Another one of them is Grímsvötn, one of Icelands most infamous and active volcanoes, which last erupted in May, 2011. During eruptions beneeth the icecap, an enormous quantity if ice usually melts, all depending on the size and duration of the volcanic activity. Sometimes a large quantity of meltwater accumulates beneath the ice and when the ice bursts, it may cause catastrophic floods called Jökulhlaup from underneath the ice. This has frequently happened in the past, causing a lot of damage, especially to roads and bridges. The most recent catastrophic flood of this kind was in 1996, when a large part of the road with large bridges to the south of the glacier was swept away in a couple of days. The name Vatnajökull translates in English as The Glacier of the Lakes and derives its name from the meltwater beneeth the ice.

Vatnajökull has numerous outlet glaciers flowing from the ice cap. One of them is Breiðamerkurjökull. At it´s foot is Jökulsárlón, the Glacial Lagoon with floating icebergs broken off the glacier. Jökulsárlón has been forming during the last 100 years or so and is still in its formation phase as it grows larger every year due to melting of the glacier ice. Jökulsárlón is currently about 19 square kilometers and one of the deepest lakes in the country, about 290 meters deep where it is deepest. The lagoon is situated by the main circular highway and there is a bridge across it´s narrow outlet channel. Jökulsárlón is one of the most popular tourist attractions in Iceland and boat trips on the lagoon to sail among the icebergs is available in summer. Surrounding Vatnajökull Glacier is Vatnajökull National Park, the largest National Park in the country.