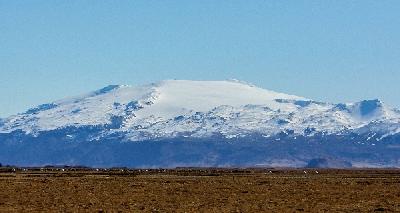 
The infamous Eyjafjallajökull glacier is very well known after the eruption in 2010 when most of the Europe´s air traffic was paralyzed due to large amounts of ashes that eruption produced. It issued vast clouds of ashes, so dark that in some areas of south Iceland, daylight was entirely obscured and the cloud of ashes interfered with hundreds of flights for weeks. During the eruption, all residents living close to Eyjafjallajökull had to evacuate their homes and farms, not only because of the ashfall but mainly due to potential floods from the melting ice of the glacier. Since the eruption took place beneath the thick icecap, a lot of ice melted during the eruption. Fortunately most of this meltwater went into many rivers in the area and did not cause much damage. Eyjafjallajökull is one of the smaller ice caps in the country, covering about 100 square kilometers and is located in south of Iceland. The two main outlet glaciers are to the north, Steinholtsjökull and Gígjökull, both flowing toward the Þórsmörk area. The mountain is a stratovolcano with a summit elevation of 1651 meters.

Eyjafjallajökull is situated about 25 km to the west from another subglacial volcano which is Katla, a much more active and more dangerous volcano. In the past, Katla has erupted many times, causing a lot of destruction, mainly due to catastrophic floods. The most recent major eruption in Katla was in 1918. When Eyjafjallajökull erupted in 2010, many people feared that it might trigger an eruption in Katla. Fortunately this did not happen but Katla is expected to erupt in the near future. Various day tours are available to Eyjafjallajökull, mostly with super jeeps or hiking tours.