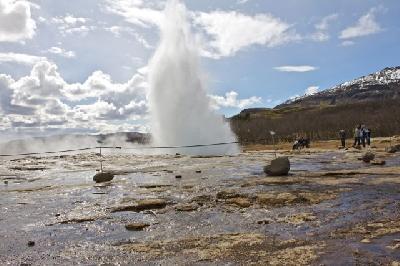 The Geysir Geothermal Area is one of the main attractions in a popular route called the Golden Circle, and is named after the biggest geyser in the area. Geysir is now quiet, but another geyser called Strokkur spouts every 5  10 minutes, offering a magnificent display. Boiling hot water rockets 1020 meters into the air without warning.
This is a great place to take a walk around the steaming vents and boiling geysers and, of course, see Strokkur erupt.In the area there is a swimming pool, a restaurant, a hotel, and a camping ground.


The oldest accounts of hot springs in the area are from 1294 and there are mentions of the geyser area in many guide books from the 18th century onwards so one could say this is one of Iceland's earliest tourist attraction. Geysir is an Icelandic name of one particular erupting hot spring and has given its name to all other erupting hot springs in the world but the English word Geyser is derived from the Icelandic word Geysir and means The Gusher.


There is a marked walking path through the Geysir area and visitors are advised to stay on the path as much as possible but the water temperature in most of the hot springs in the area is close to the boiling point. You are also advised to notice the wind direction when standing close to an erupting geyser to avoid getting hot water and steam blown over you. Always stand so, near to the erupting Strokkur that you have the wind blowing in your back.


Only about 10 minutes drive further inland from Geysir is the magnificent waterfall Gullfoss or the  Golden Falls, which is one of the largest waterfalls in the country. It is 32 meters high and cascades into the canyon below in two steps. Gullfoss is in the glacial river Hvítá that takes its source in the second largest glacier in Iceland, Langjökull. These amazing places are included in many of our self drive itineraries and for those who don't have much time, it is also included in all our Golden Circle day tours and is truly a must see place to visit.


A geyser like Strokkur is a vertical shaft that reaches from the ground surface and down into the ground. In the case of Strokkur, the shaft is approximately 20 meters deep and from the bottom, there are crevasses that reach deeper into the ground. The shaft as well as the crevasses are filled with water, close to the boiling point, which is about 100 decrees C, but only at the surface where the water is under one atmospheric pressure. The boiling point of water increases with pressure and deeper down in the shaft, the boiling point is considerably higher, due to the weight of the water columns above. Near to the bottom of the shaft, the boiling point is close to 130 degrees C, - in other words, the water can reach a temperature as high as 130 degrees before it boils.

Since the water flow through the crevasses into the shaft is irregular, water from deep down can suddenly reach higher up in the shaft. This causes a sudden steam explosion when the water becomes superheated due to drop in pressure, as it gets closer to the surface. Water in the form of steam needs a lot more volume than liquid water and it is the increased volume of the steam, that pushes the overlying water column above it out of the shaft and to the surface.

Some eruptions reach high up in the air and other are not as powerful. This depends on where in the shaft the steam explosion takes place. If it occurs near to the surface, the water does not get thrown very high in the air. On the other hand, if the explosion takes place deep down, more water is thrown into the air and the eruption reaches higher.


Geothermal activity is a side phenomenon of volcanic action. Due to a great volcanic activity in Iceland, the earth´s crust is not as thick in Iceland as it is most other places. The average thickness of the earth crust is 50  60 kilometers but in Iceland the average thickness is only about 10 kilometers. In the most volcanicly active zone, the crust is not even 10 kilometers thick, so a hot rock is to be found not too deep in the ground, although it may not be molten. Water in the geothermal areas is in most cases rain water that seeps into the ground and gets heated by the hot rock and after being heated, it rises towards the surface to form geothermal areas and hot springs. Tours and travel information to Geysir geothermal area and Strokkur can be found at www.icelandroadtrip.com and are included in many day tours from Reykjavík as well as on many self drive tour packages.