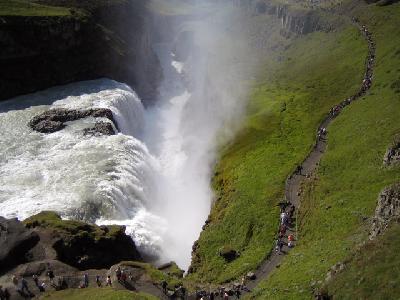 Gullfoss Waterfall is one of Icelands most majestic waterfalls, plunging down 32 meters into the Hvítá river canyon below in two stages. As one of Iceland's most popular attractions, the waterfall provides a memorable site, especially on sunny days when the mist from the waterfall creates rainbows giving the waterfall a beautiful crown. As the source of Hvíta river is at Langjökull glacier, the water flow diminishes in winter, however it is still an impressive sight. When visiting in winter be careful as the walking path can get slippery from the frozen mist from the falls. The name of the waterfall would directly translate as the Golden Waterfall. Along with Thingvellir national park and the Geysir area they form the backbone of the so called Golden Circle which is a very popular one day road trip from Reykjavik.

In the beginning of the 20th century, it was seriously considered to dam the canyon in order to build a hydro electrical power station, which would have resulted in unforeseen changes to the waterfall and luckily the plans did not go though, mostly due to efforts made by Sigríður Tómasdóttir who was the daughter of the land owner at Gullfoss. Her father had signed a contract to allow construction of a power station that would have ruined the waterfall. Sigríður Tómasdóttir made a lot of effort and among the things she did is that she walked all the way from the Brattholt farm, close to Gullfoss where she lived, a distance of more than 100 kilometers to get herself a lawyer to help her with the case and she took her father to court. She also threatened to throw herself into the waterfall, if work would begin on the project. Thanks to Sigríður Tómasdóttir, there is no power station at Gullfoss and the waterfall is now owned by the Icelandic State and is protected. Close to the waterfall is a rock with a metal plate on it with a picture of a woman. This is a memorial to Sigríður Tómasdóttir, made by the Icelandic sculptor Ríkhaður Jónsson. Gullfoss is included in many of our self drive itineraries. For those who don't have much time, it is also included in all our Golden Circle day tours and is truly a must see place. Tour options to Gullfoss waterfall can be viewed at www.icelandroadtrip.com