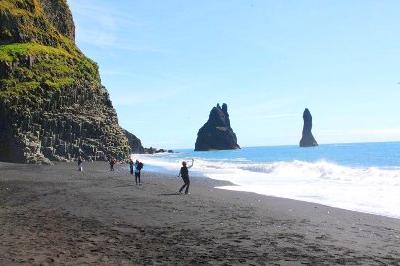 Reynisfjara Beach is a beach like no other with black sands and mesmerizing rock formations. It is located a short distance west of the village Vík, the southernmost town on the south coast of Iceland. It lies at the foot of Mt. Reynisfjall with its steep sea cliffs that are nesting grounds to numerous seabirds in summer. From Reynisfjara beach, just a short distance offshore, there is a great view of the stunning Reynisdrangar, beautiful and tall basalt columns on the seaside mountain slope, that rise up from the shore, looking like man made structures but created by nature. According to old legend, these are said to have been sea trolls attempting to reach shore in the cover of night, that were turned to stone when hit by a morning sunlight. Rising from the shore at Reynisfjara is the steep sided Reynisfjall mountain, which in summer is a nesting colony of thousands of seabirds, including Puffins. At the foot of Mt. Reynisfjall is a beautiful cave with a ceiling of basalt columns. The cave is only accessible when the tide is low and an attempt to enter can be very dangerous during high tide.

Reynisfjara´s black basalt volcanic sand beach is by many people believed to be among the most beautiful beaches on the planet, but it is also considered to be one of the most dangerous tourist attractions in Iceland. Sadly, several people have drowned on the beach in the past years, after being caught by powerful waves that have swept them out to sea. Therefore, people need to be extremely careful when visiting the the beach, especially in windy weather. Stay far back from the water and read all signs and warnings. Remember that you can NOT estimate the size of the next wave, only based on the size of the previous one. Please be careful as rogue waves are common and the current can be extremely strong.

The black sands of Reynisfjara Beach, as well as all black sand beaches of the south coast of Iceland, are volcanic deposits, that in the course of thousands of years, have been brought to the coast, carried along with glacial rivers and often in catastrophic floods, during volcanic eruptions beneath the icecaps of numerous glacier capped volcanoes in the south of Iceland. On Reynisfjara beach is the farm Garðar, which is the southernmost inhabited place in Iceland.

A few kilometers to the west on the black beach sits Dyrhólaey Headland. The name means Door Hill Island and the headland, which is a former island, derives its name from a hole that has been eroded through the cliff by the ever pounding ocean waves and has formed a spectacular arch through the solid rock. Dyrhólaey is what is left of an old volcano, a so called crater plug. The outer soft materials have been washed away by water erosion but the inner solid core still stands on the black beach. Dyrhólaey is in summer a nesting colony of numerous seabirds, including Puffins and Arctic Terns, as well as many other species. There is a lighthouse on top of Dyrhólaey Headland, which is the southernmost tip of Iceland. Only about one kilometer to the east of Reynisfjara Beach is the Village Vík. The village is however not visible from Reynisfjara due to huge rock slides from Mt. Reynisfjall that block the view. Vik is one of few towns and villages located on the coast in Iceland that does not have a harbor but the coast at Vík is a rather shallow sandy beach. Due to a strong ocean current and sometimes high surf, the sand is constantly shifting and drifting about on the beach, making it unsuitable for building a harbor.