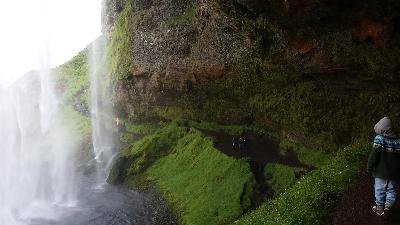 Seljalandsfoss Waterfall is a spectacular waterfall in Southwest Iceland and of the best known waterfalls in Iceland, as well as also being one of the most photographed locations in the country. Seljalandsfoss waterfall is one of the highlights of the famous south coast in Iceland. The waterfall is located at the Eyjafjöll Mountain District and at the foot of the infamous Eyjafjallajökull Glacier and a volcano where there was a major eruption in the year 2010, causing serious disruption to air traffic. A great number of flights within Europe had to be cancelled but the airspace of about 20 countries had to be closed to commercial jet traffic for weeks, due to a cloud of ash that was carried with wind far from the volcano. Seljalandsfoss is located at Þórsmerkurvegur Road, or the road that leads to Þórsmörk, close to the junction of road 1.


It does not come close to being the tallest waterfall in Iceland, at only 62 meters high, and is definitely not one of the most powerful waterfalls, but it´s sheer natural beauty and the surrounding landscapes attracts a lot of people, not to mention the unique feature of being able to walk around the waterfall itself and into a cave behind it.


The unique pathway in the cliffs, that stretches all the way behind the waterfall gives a fantastic view and is quite worth the drizzle that you may get for walking the pathway. The view from behind the waterfall to the black sand beach and the ocean is nothing short of spectacular. Be careful in the winter as the mist of the waterfall tends to freeze and to make the pathway slippery and possibly dangerous, so remember to use your crampons when visiting during the winter. Sometimes the pathway gets closed during the winter time due to the danger of falling chunks of ice and icicles. Seljalandsfoss Waterfall can be seen from the main highway when approaching it from the west and is a must-visit if passing by.


It´s close neighbor is another pretty waterfall called Gljúfrabúi, located at Hamragarðar, an abandoned farm, only about 150 meters walking distance from Seljalandsfoss. The name Gljúfrabúi means  Gorge Dweller and it is hidden in a narrow gorge that has been eroded by water into the soft rock that surrounds it. Make sure you don´t miss Gljúfrabúi Waterfall, but many people find Gljúfrabúi more scenic than Seljalandsfoss. Available tours and travel information is available at www.icelandroadtrip.com