The Blue Lagoon (What To See - South West) 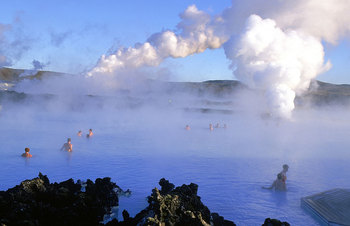 The Blue Lagoon is a bathing area that came into existence in 1976 by accident, in the middle of a vast lava field, as a result of operations in a geothermal power plant in Svartsengi geothermal area. A number of boreholes were drilled into the ground in Svartsengi, in order to find hot water for the power plant, which was to have two functions. The superheated water in the ground comes out of the boreholes under extremely high pressure and is all turned into steam as it reaches the ground surface. The steam pressure was to be used for turning turbines for generating electricity but also for heating homes and other buildings as well as for washing and bathing in several towns and villages on the Reykjanes Peninsula. But there was one problem. Due to the high temperature which is well over 200 degrees C, a high content of various minerals are dissolved in the water, like silica, sulphur and salt. These minerals are corrosive and would quickly damage pipes and radiators. Therefore a heat exchange station was built at Svartsengi, where the hot mineral rich water is used for heating cold fresh water, that after being heated by the hot steam, it is piped to the towns for heating homes and other buildings. After the mineral rich water has gone through the heat exchange process, it has cooled down, but not completely and it was dumped into the nearby lava field where it was expected to seep into the ground and disappear. This did not happen and little by little, the water filled a depression in the lava field to form what we call the Blue Lagoon, which is usually pleasantly warm, between 38 and 40 degrees C. Soon after the lagoon was formed, people started to visit the warm "waste" waters for bathing and noticed that for those with skin disorders like psoriasis and some other, the water has soothing properties and a healing power, due to its high content of algae, silica, and other minerals. This has now been confirmed by academic research to be true and treatments supervised by a nurse and dermatologist are available in a separate clinic, located by the Blue Lagoon. Today, a lot of development has taken place to make the lagoon more accessible and allowing more people to visit, so now the Blue Lagoon is one of Iceland´s most visited sites where you can go for a relaxing bath in the surreal surroundings. At the Blue Lagoon, you can enjoy a stroll, dine at the Lava Restaurant, get a massage treatment, and visit the Blue Lagoon Café. There is also a fine hotel situated by the Blue Lagoon. You could spend all day there but visitors tend to stop there for about 1,5 to 2 hours, bathing in the lagoon. The Blue Lagoon is located about 20 minutes drive from Keflavik airport and 45 minutes from central Reykjavik, making it an ideal place to visit on your way to or from Reykjavík or Keflavík Airport. Due to its popularity and limited number of people allowed to enter each time, in order to prevent overcrowding, it is recommended to book your visit in advance.

The Vicinity of the Blue Lagoon

Close to the Blue Lagoon on the Reykjanesskagi Peninsula is Grindavík fishing town. Only about 6 kilometers from the Blue Lagoon, as the Crow flies, is Fagradalsfjall Volcano, where a volcanic eruption started on the 19th of March 2021, following a long period of seizmic activity in the area. The eruption attracted a lot of visitors, but it came to an end in late September the same year. Many self drive tours, as well as day tours from Reykjavík to the Blue Lagoon can be found at www.icelandroadtrip.com