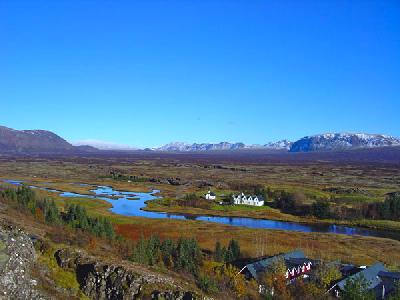 Þingellir ( Thingvellir ) National Park is a UNESCO World Heritage Site. Þingvellir National Park is a unique place from a geological point of view. Research has shown that Þingvellir is a natural wonder on an international scale, where evidence of continental drift and the rifting of the earth's crust can clearly be seen. There are few places on the planet, - if any, where evidence of continental drift is as clearly visible on the earth surface as it is at Þingvellir. Þingvellir is a meeting place of the American and Eurasian continental plates that are separating or drifting apart.


Þingvellir is also the most historical place in the country and a place of exceptional beauty. Þingvellir National Park, where the Icelandic parliament was established in the year 930, is the most historic landmark in Iceland. The Icelandic Parliament, Alþingi is believed to be the oldest parliament in the world in continuous existanca, still existing after more than 1000 years. For centuries, the meetings of the paprliament were held every summer at Þingvellir, which means the  Parliamentary Plains and always in the open air. There was never a parliament building at Þingvellir and the place at Þingvellir where the meetings were held is called Lögberg, which means  Rock of Law. Chieftains as well as numerous other people from all parts of the country used to gather at Þingvellir, not only for forming new legislation but also to settle disputes, meet other people and for merry making as well as to carry out sentences, but a part of the national assembly also functioned as a court.


Geologically speaking, Þingvellir is also of great importance because the mid-Atlantic ridge runs right through Þingvellir, creating a fascinating rift valley, where the two continental plates are drifting apart, at a rate of approximately one to two centimetres per year. Þingvellir is a natural paradise with lunar-like landscapes where you can find Iceland´s largest lake, Þingvallavatn.


The park includes an Information Centre with a café / restaurant and a camping site. Numerous hiking trails are to be found in the National Park. Outside the ancient assembly site, most of the hiking trails are associated with old and abandoned farms of Skógarkot, Vatnskot and Hrauntún, all situated on the plains between the two continents. The remains of the old farms can still be seen. There is a very interesting Visitor Centre at the main viewpoint at Hakið, at the upper edge of Almannagjá, the western fault, where information about the National Park is provided. At the the same place is a cafeteria and a souvenir shop. Close to the Service Centre at Leirar, well equipped camping grounds are to be found .