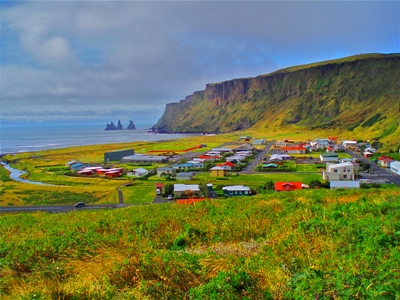 
Vík is a charming small town by the black beaches on the southernmost coast of Iceland´s mainland. Its black basalt volcanic sand beach is by many people considered among the most beautiful beaches on Earth, but it's also considered one of the most dangerous tourist destinations in Iceland. On the coast, only about one kilometer to the west from Vík is Reynisfjara Black Beach, located at the foot of the steep Mt. Reynisfjall. Reynisfjara Beach is however not accessible directly from Vík due to a huge rock slides from Mt. Reynisfjall that block the route as well as the view so Reynisfjara Beach has to be approached from the west of the mountain. Several people have drowned on the Reynisfjara Beach, a short distance to the west from Vík in the past years, after powerful sneaker waves have caught them and swept them out to sea. Therefore people need to be extra cautious on the beaches around Vík, especially in windy weather. The beach is sheltered from northerly winds by Reynisfjall mountain with steep sea cliffs, that are home and nesting grounds to numerous seabirds in summer, for example Puffins, Kittywakes and Fulmars. A short distance offshore lie Reynisdrangar, tall pillars of basalt rock, battered by the powerful sea waves.


The Vík community has approximately 500 inhabitants and is a popular destination for tourists, due to the natural wonders surrounding the town. Although Vík is located directly on the coast, it does not have a harbor. This is due to the fact that most of the coast of Iceland is a low and a rather shallow sandy beach, with constantly drifting black volcanic sand that makes it impossible to build a harbor. Among things you will find in Vík are a filling station, a camping site, a wool knitting factory, hotels, guesthouses and restaurants, to name only a few but in recent years, Vík has become an increasingly popular tourist destination.

The nearby Katla Volcano


The village Vík lies a short distance south of the Mýrdalsjökull Glacier, which carpets the top of a large and active volcano named Katla. This volcano has erupted numerous times since the settlement of the country, about 1100 years ago and the most recent major eruption was in 1918. The eruption lasted for about a month and had devastating consequences to it´s surroundings, but it also added land to Iceland. Due to the enormous deposits of sand and gravel that were carried along with the meltwater from the glacier ice on top of the volcano, the south coast of the country extended about 5 kilometers to the south during the eruption. Katla eruptions have in the past occurred with about 50 years intervals on average, so Katla is already long overdue (2022) and according to recent studies, it is expected to erupt again in the near future. Katla eruptions are usually accompanied by large floodings due to ice melting in the glacier, called Jökulhlaup.


A few kilometers to the west of Vík is the promontory Dyrhólaey, which is a former island, now connected to land by low sand deposits. The name translates as Door Hill Island and takes it´s name from a large hole or an arch that has been eroded through the offshore part of the headland by the ocean waves. Dyrhólaey is the southernmost part of the country and is a protected nesting colony of many seabirds in summer, including Arctic Terns and Puffins. The village Vik is the southernmost village in Iceland and enjoys the mildest climate in the country. A great number of tours including Vík Village can be found at www.icelandroadtrip.com