Dynjandi Waterfall (What To See - West-fjords) 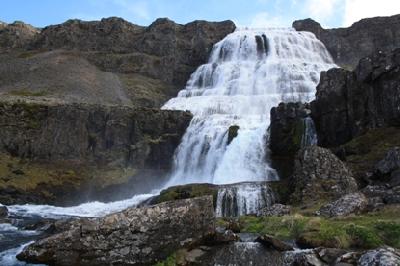 Dynjandi Waterfall, or Fjallfoss as it is also called, is one of Iceland's most spectacular waterfalls consisting of five waterfalls cascading in steps down the 100 meters (330 ft) cliff. The waterfall is 30 meters wide at the top and about 60 meters wide at the bottom, giving it a majestic appearance resembling a bridal veil. The name translates to thundering or beating waterfall. Some people like to hike alongside the waterfall for another breathtaking view. The walk takes about 15 minutes from the parking lot below and up to the waterfall . The lower part is paved and accessible to all but the higher you get it becomes more of a challenging trail. In summer, restroom facilities are open during the day however in winter only dry toilets are accessible.

The drive to Dynjandi

Dynjandi is located at the foot of Dynhjandisheiði Pass, which is a rough gravel road, but in 2021, work began on a new road construction across the pass. Dynjandisheiði Pass has in the past been a great obstacle and the road has often been impassable due to snow in winter. In the past, it has been difficult to reach Dynjandi during the winter months but with better roads and a newly constructed tunnel, it is now easier to reach during the winter months. Dynjandi waterfall is located close to road 60 Vestfjarðavegur at the bottom of the Arnafjörður Fjord where road 621 meets road 60, take road 621 south for 2 minutes and you are at the parking lot.