Arnarstapi Village (What To See - West) 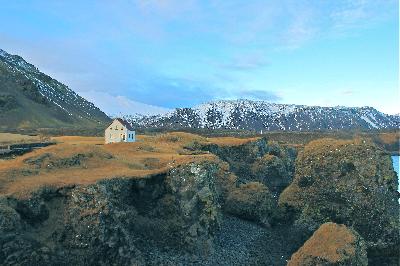 Arnarstapi is a small fishing hamlet, located in a coastal area on the southern side of the Snæfellsnes Peninsula, which is about 120 kilometers long peninsula that divides the west coast of Iceland into two large bays, Faxaflói and Breiðafjörður. It used to be a busy fishing port in the past and to some extent it still is today during summer, especially for private fisherman and recreational small boats. However, it used to host a greater population than it does now. Today it is a popular area for summerhouses and is therefore a lively location during summer. Arnarstapi offers great coastal scenery with beautiful rock formations on the eroded coast, constantly beaten by the ocean waves.


There is a very rich birdlife at Arnarstapi in summer with numerous seabirds nesting on the cliffs. There is also a large nesting colony of Arctic Terns at Arnarstapi, where thousands of them nest every summer. Arctic Terns are incredible birds, but Arctic Terns are the bird species that flies the longest migration route of any bird species in the world. The arrive surprisingly punctually in Iceland every spring around the middle of April, after flying to Iceland all the way from Antarctica, almost half way around the globe. The individual birds nest in Iceland, always on exactly the same spot, year after year and perhaps it is wrong to say they nest because the don´t build a nest, as the lay their eggs on the bare rocky ground. The eggs are hatched in a few weeks and by the end of August they leave Iceland and fly back to Antarctica together with their chicks. It is estimated that in a lifetime of an Arctic Tern, that weighs only about 100 grams, it is likely to fly a distance that equals two and a half time the distance between the Eart and the Moon, only on migration routes. At Arnarstapi you will find easy access to bird cliffs and beautiful lava fields.


An interesting short hiking trail will lead you from Arnarstapi to Hellnar along the shoreline that takes about 60  90 minutes to hike. Beautiful rock formations on the shoreline and the towering Mt. Stapafell and Snæfellsjökull glacier make Arnarstapi a popular place to visit amongst tourists. An old folk story says that the half troll and half human named Bárður Snæfellsás, settled in the area after fleeing tyranny of the king of Norday, Harald. After a while he gave up all his earthly possessions and is said to have disappeared into Snæfellsjökull glacier, where he lies in his ice cave and serves as the guardian of Snæfellsnes. A statue or a monument to Bárður Snæfellsás can be found a the entrance to Arnarstapi, made by the artist Ragnar Kjartansson. Self drive tour packages, including Arnarstapi can be found at www.icelandroadtrip.com