Borgarnes-Town (What To See - West) 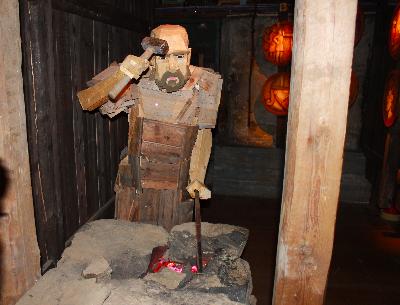 Borgarnes is a town in Borgarbyggð District in the southwest of Iceland with a population of some 2000 people, located only 70 kilometers from Reykjavik or about an hours drive. Borgarnes is like many other town in the country, a coastal town but unlike most Icelandic coastal towns, it does not depend on fishing, but rather on trade and service to the surrounding faming districts as well as some industry.

In Borgarnes town you will find the interesting museum, Icelandic Settlement Centre, whose main objective is to present the fascinating sagas from the settlement times as well as a special exhibition of the famous Viking poet, Egill Skallagrímsson but he was the son of one of the early settlers of Iceland, Skallagrímur Kveldúlfsson and lived on a farm called Borg which is located just outside of Borgarnes. The town derives its name from the farm but Borgarnes means Peninsula of Borg. This is one of the most popular attractions in Borgarnes town, as the area around west Iceland is rich in history and settlement in Borgarnes goes as far back as the settlement of Iceland around the year 900. At Borgarnes Town, you will also find Safnahús Borgarfjarðar, which is a museum that displays cultural artifacts and historical photos.

All major services are to be found here like hotels and guesthouses, a campsite, gas stations, restaurants, cafés, bank etc, and it is truly a beautiful town well worth a visit. Borgarnes has for many years served as a popular road-stop for snacks, gas and a quick meal for locals driving north or west from the capital, Reykjavík.